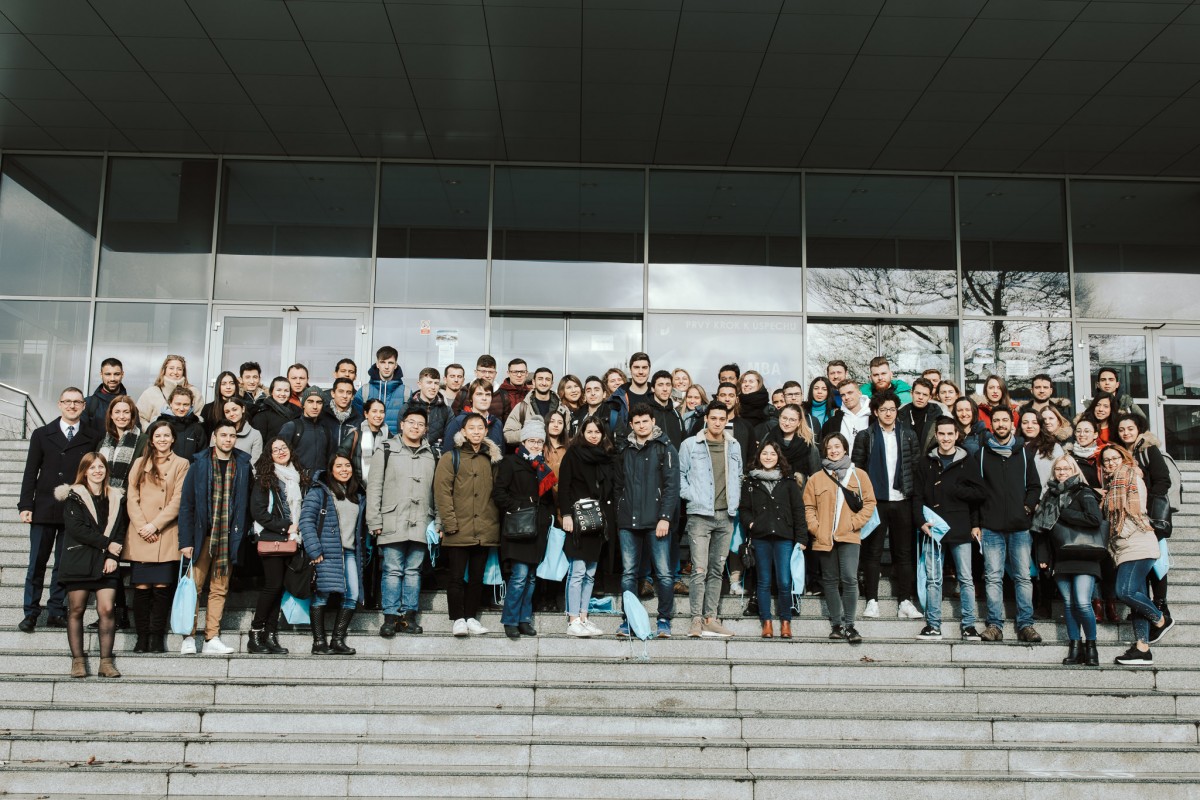 Why do foreigners choose to study in Slovakia

For more than 80 years of its existence, our oldest economically oriented university has sent more than 100 thousand graduates to the world. Thousands of foreigners were among its students.

International students enhance the national and international reputation of universities, and they are also considered when assessing the quality of studies. The figures of international students at Slovak universities have been gradually growing. According to data from the Ministry of Education, in the current academic year, roughly every eighth student out of a total of more than a hundred thousand undergraduates is from abroad. Traditionally, medicine has been the biggest attraction, but foreigners are now also interested in fields that were previously pursued abroad.

The University of Economics evidences this in Bratislava, which was the first University in Slovakia to receive the prestigious international accreditation of the AACSB last year. Before the outbreak of the coronavirus pandemic, it hosted several hundred international students each year. The current figures are gradually returning to the level of two years ago: 119 foreigners graduated from EUBA in the winter semester, less than a hundred in the summer semester.

The reasons why foreigners choose our oldest economically oriented university, which will celebrate its 82nd birthday this year, may vary. It is also interesting to know what they would transfer from EUBA to their home university.

Awards for the school and the city

The majority of the students interviewed who attended the winter semester at the University of Economics in Bratislava agreed that they came on the recommendation of friends or other participants of the Erasmus+ exchange program. "I chose EUBA because it was recommended to me by an enthusiastic friend about the university environment there," said Luca Cataldo - Parthenope University of Naples, Italy.

Some of the foreigners interviewed confirmed that specific study programs appealed to them. "Several factors determined the choice of school. The first was that EUBA offered a course of study that was well connected to my Master's degree. At the same time, I wanted to discover a new country in Central Europe," Lucas Brunet - Grenoble Alpes University, France, sums up.

The strategic location of Bratislava and the natural and cultural beauties of Slovakia were frequent reasoning of why foreigners decided to study at EUBA. "A lot of my friends did Erasmus+ in Austria and Slovenia, Bratislava tempted me, and I didn't regret it. I was close to my family and friends," said Christoph Tutschek - Paderborn University, Germany. João Maria Matias Gomes - Iscte - University Institute of Lisbon, Portugal, reacted similarly: "I chose the University of Economics because a friend of mine recommended it to me. However, Bratislava was also a decisive factor, as I heard from several students that it is a good city - because of its location, atmosphere, and proximity to other countries."

"I come from Spain, and I wanted to get to know a different country from my birthplace. Slovakia has a great location with a unique opportunity to visit several neighboring countries,"  Erika García - Alcalá University, Spain, has mentioned.

Responses from international students from the western part of the old continent showed that many perceive the Central European region as somewhat exotic. "Only a few people from my home country were in Slovakia, so I was attracted to it. At the same time, I was intrigued that a woman became the head of state after the presidential election. Last but not least, I wanted to learn the Slavic language," concluded Cathrin Daniel - Osnabrück University of Applied Sciences, Germany.

The opportunity to learn a Slavic language in combination with a little-known country was also mentioned as a reason for their choice by other students who took part in the survey organized by the University of Economics in Bratislava.

Although Slovak students used to criticize mainly the distance of Slovak lecturers, certain inaccessibility, and formal approach in the past, this is no longer the case. This was confirmed by the majority of foreigners involved in the survey of the University of Economics in Bratislava.

"If I could, I would transfer the availability and flexibility of teachers to my home university in Italy. I have written to several teachers, who have always replied very quickly. In Italy, they also responded to me, but the response was not so prompt," said Patrizio Lacono - European University of Rome, Italy, summarising his studies experience at EUBA.

Peter Hilsmann - Berlin School of Economics and Law Schöneberg Campus, Germany, also appreciated the communication with teachers, especially during the so-called digital semester. "Since the semester was online and I stayed in my home country, the interaction was important. I liked communicating with the tutors via email and Teams; they responded quickly. The digital exams were well prepared; we did not have to wait for grades."

Cathrin Daniel - Osnabrück University of Applied Sciences, Germany, highlighted the positive approach and involvement of teachers in the studies. "My studies at the university were well organized; I found all the information I needed on the school's homepage," she added.

Many of those who took part in the university´s survey highlighted the interconnectedness of studies with practice and the international atmosphere as positive factors.

"During my studies at EUBA, I appreciated the level of interaction between professors or associate professors and students in theory and real-life experiences," said Lorenzo De Carli - European University of Rome, Italy. In this regard, he particularly highlighted the lecture of the Austrian Ambassador to Slovakia, Margit Bruck-Friedrich, who also invited the students of “Diplomacy in Practice” to an excursion of the Austrian Embassy. "However, it is true for the whole study at EUBA that the teachers brought important practical information," he added.

Ana Pires - University Institute of Lisbon, Portugal highlighted the approach of the teachers and the organization of the study - namely that most of the teaching was done in small groups. "The teachers were helpful and systematic, willing to help. Most of them focused on skills applicable in practice," she assessed.

The size of the student groups was also appreciated by Erika García - Alcalá University, Spain. "Most of the groups were generally made up of fewer students than I was used to in my country. The result was dynamic teaching and motivation to be more active. I would also transfer to my home university the possibility to choose from more exam dates," she specified the benefits.

80 years on the market

In 2021, the University of Economics in Bratislava joined the family of the best economically oriented schools in the world, having completed the AACSB (Association to Advance Collegiate Schools of Business) accreditation process.

During its existence, it has educated more than 100 thousand graduates. Thousands of students from abroad have also studied at EUBA.